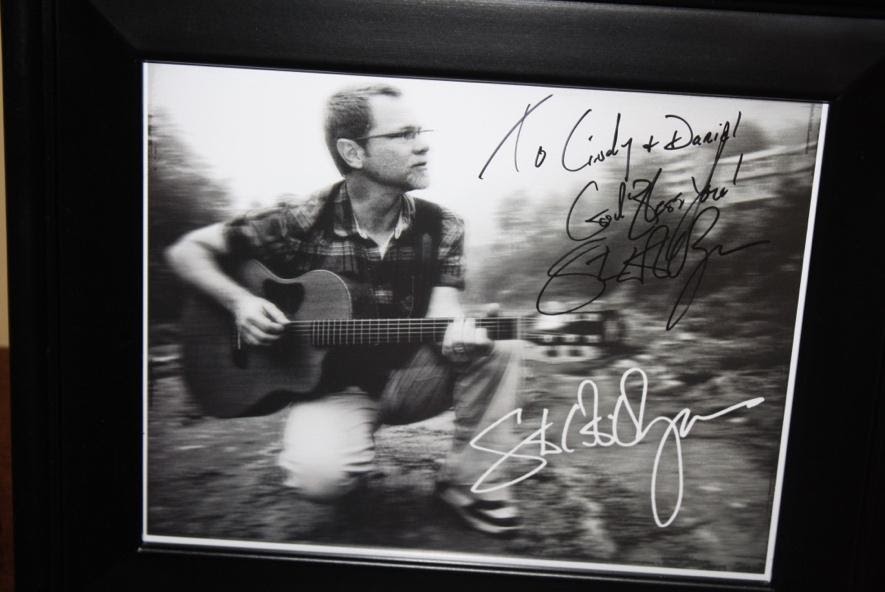 “Religion that is pure and undefiled before God the Father is this: to visit orphans and widows in their affliction” (James 1:27, ESV).

Steven. Curtis. Chapman. Those are three excellent words! On Thursday, March 21, 2002, he brought his Live Out Loud Tour to Charlotte, NC. For over three hours, my senses and my soul were pleasantly pummeled with a wall of stimuli: guitars, drums, piped-in orchestras, keyboards, lasers, digital displays, and so on. Simply put, it was awesome!

It is a night forever ingrained in my memory for two reasons. First, as Mr. Chapman wailed away on his guitar and sang songs that have lasted for generations, neatly tucked away in its hiding place at my house was a ring that I planned on giving to my then-girlfriend the following day. But second, that was the night the decision to adopt was planted in my psyche. One of the songs he played that night (and hundreds of nights since) was called “When Love Takes You In.” As a young man in my 20s, I was more interested in my senses being assaulted, and so Steven sitting at the piano for a softer moment was not exactly what I wanted to witness! But then the video board sprang to life, and walking slowly down the beach was his daughter, Shoahannah Hope. He told the story of how he and his wife, Mary Beth, had felt led to make the trip to China to bring this girl home. Sitting next to my girlfriend, who would become my fiancée the next day, my wife in July 2003, and my wife still today, I was stirred. I know she had thought about adoption before I did, but that was the first time I remember consciously thinking, “I should probably do this.”

I had sponsored children before through Compassion International, but this was something entirely different. Over the next ten years, the Lord continued to work in both our hearts. Our discussions before marriage about children pretty quickly led to this resolution: we will have two biological children, and then we’ll adopt. There were twists and turns along the way, including a “false start” where we nearly started adoption paperwork from South Korea, but our lives were inexorably led down the path of adoption.

We have often been asked, “Why China?” There are many reasons, but it almost certainly starts with the Chapman family. As we continued to watch them adopt two more daughters from China, our hearts were continually stirred. Another family we were close to (the Clarks, then living in McKeesport, PA) had also adopted several times from China, and so we were often caused to see and remember and think about adoption. China was revealed to be the most stable of the programs we were able to find. And while many wondered why we didn’t adopt domestically, we felt led to adopt a child with no social support system or associated fallback. Most of the children adopted from China at that time were abandoned orphans, with very little hope of any semblance of a “good life” within their borders. This was only bolstered by the verse quoted above in James 1—adopting a child “in their affliction” of loneliness and abandonment and sorrow. As we’ll notice later on during the week, this is exactly what God did for us. In our sin (personally or the world in general), His love took us in. Satan could promise nothing but to eventually abandon us, leaving us alone and stricken with eternal sorrow. Then came our Lord Jesus. John says of God’s love in sending Him here, “See what kind of love the Father has given to us, that we should be called children of God” (1 John 3:1, ESV).

With that in our minds and on our hearts, there was one last hurdle that remained. Both parents had to be 29 ½ years old to begin the adoption process. Had my wife been born earlier, we would have started the process earlier! So, on March 6, 2011, the exact day after she turned 29 ½ (yes, I know you can do the math now), we logged on to Holt International’s website and filled out our initial application to adopt. The process had begun! We were both very excited and very nervous. We knew the process would take a while, but we were happy that at least the clock had started.

Unbeknown to us, more than 6,700 miles away, a little baby girl had been found on the steps of a middle school in Changchun, China. The date? March 6, 2011. If my wife had been just a little older, we almost certainly would have never met this little girl. But in the months that followed, our worlds would slowly intersect and then become one 16 months later. To us, the final decision had been made, and we were never going back.

Trusting God with a Sick Child

The Impact of Jesus on Seven Men 4: James

Testimony in the Workplace 7: Make it Count