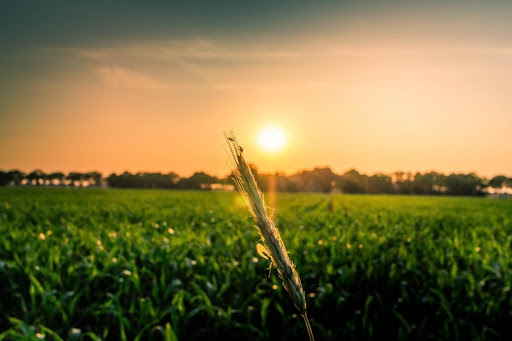 “Have I not commanded you? Be strong and courageous. Do not be frightened, and do not be dismayed, for the Lord your God is with you wherever you go.” (Joshua 1:9, ESV)

My husband and I have always said that we know, without a shadow of a doubt, that God brought us together. If it were up to us, this union would not have taken place. For starters, he is a farmer from Iowa and I am a city girl from New Jersey who never had any intention of moving to the country. Ever. Yet here I am. God’s ways are strange sometimes.

When Ben and I were dating, he informed me right away that he could not farm in New Jersey, so if we were going to get married, it would require me to move to Iowa. We dated for three years, so I had a long time to really think about whether I could make it as a farmer’s wife. I’ll admit that there were times (several, in fact) when I wasn’t so sure about it, and quite a few people told me they weren’t too convinced about it either. But ultimately, I knew that Ben was the guy I wanted to marry, even if it meant moving 16 hours away to what seemed like a very desolate land. Did I experience a culture shock when I finally settled into Iowa? Most definitely. And it took me a solid 10 years before I finally understood why I was here.

I have often admired Ruth, and the determined spirit she had when it came to following her mother-in-law, Naomi. After their husbands died, Naomi was instructing Ruth to return to her people, her family, and the comforts of her home. But Ruth replied, “Do not urge me to leave you or to return from following you. For where you go I will go, and where you lodge I will lodge. Your people shall be my people, and your God my God. Where you die I will die, and there will I be buried. May the Lord do so to me and more also if anything but death parts me from you” (Ruth 1:16-17). Such incredible devotion! I wonder if it was hard for Ruth to travel to a foreign place where the only person she knew was her mother-in-law—a place where she had to find work, on her own, to meet their needs. I wonder if, after arriving in Bethlehem, she ever had thoughts of returning to what she knew back in Moab, where she had friends and family and felt more comfortable. If she did, she didn’t give in; she chose to remain in Bethlehem. Because of this, she was blessed beyond measure, becoming the great-grandmother of King David and a direct ancestor of Jesus Christ. Ruth didn’t know it at the time, but her willing spirit allowed God to use her for His ultimate plan of salvation.

For many years, I had no idea why God wanted me to live in Iowa. My friends and family were all far away and life was just so different. Oftentimes I felt alone, even though I wasn’t alone. I was married to my best friend, and I had made friends here, but something was missing: my purpose for being here. After about 10 years, I finally realized what it was. I had such a peace when I understood why I was here and what God wanted from me. I’m sure He would have revealed it to me earlier if I had been more willing and open to finding it. I spent a lot of years dwelling on how different and, quite frankly, “boring” I thought Iowa was, when I should have been looking for how I could serve Him best in the place He brought me to. Since I came to that realization, God has continued to confirm that purpose. He has opened many opportunities for me to understand and enjoy my purpose and appreciate why I was brought to Iowa.

If you have moved far from home (or are considering it) and are feeling unsure or unhappy in your new location, I encourage you to find your own unique strengths. God wants to use you and the specific gifts that only you can offer, no matter how big or small they may seem, if you are willing.

I Am 4: I am the Resurrection and the Life