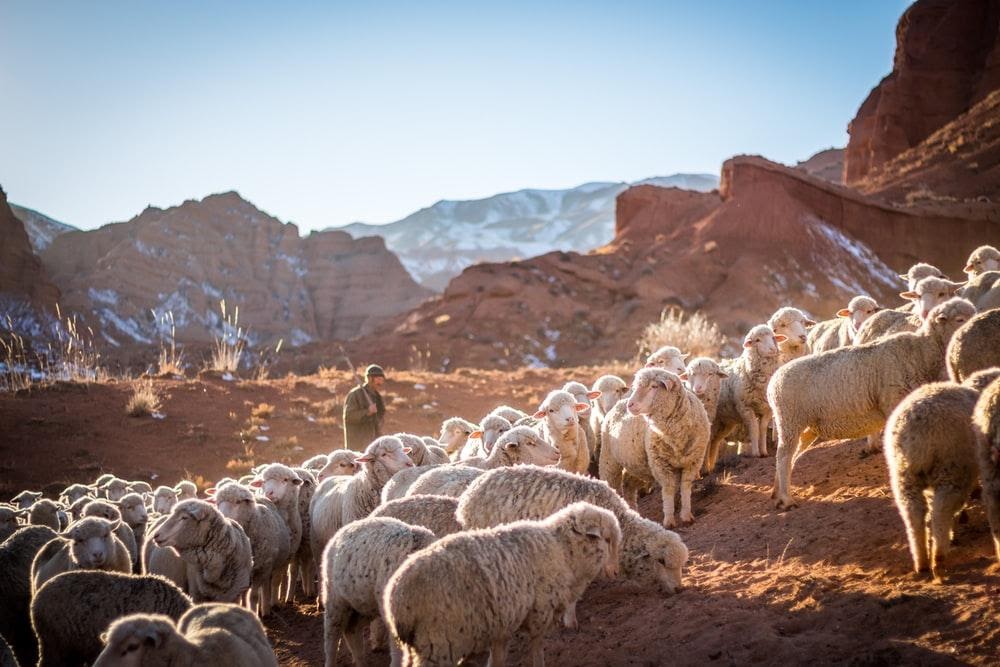 I Am Day 3: I am the Good Shepherd

I don’t know about you, but I have no experience when it comes to looking after sheep; I don’t even think I have ever met a shepherd. I do have experience, however, watching my parents’ dogs, and from my point of view, they are about as helpless as sheep. From what I understand, sheep are not independent, are not hunters or predators, and are considered to be defenseless. They enjoy grazing, and often get so carried away with eating that they can wander far away with no sense of how to return. When sheep are approached by a predator, they can’t fight or intimidate, so they gather with others in a flock and create a giant target. In short, sheep are not very intelligent creatures.

In 2005 in Gevas, Turkey, a group of Turkish shepherds watched in shock as one sheep jumped off a cliff to its death. Not a big deal, right? After all, the other sheep will surely see the peril and stay away. Wrong! Over twenty families watched in horror as nearly 1,500 sheep followed the lead of the first sheep and jumped off the cliff. As a result, almost 450 sheep died, and the only reason the other 1,000 or so sheep lived was because the pile of sheep became so large that later jumpers had a cushioned landing.

In John 10, the Lord Jesus was speaking to people who were very familiar with sheep. Speaking of Himself as the “good shepherd,” He effectively contrasted Himself with the false shepherds of the day. He described false teachers as those “who come to you in sheep’s clothing but inwardly are ravenous wolves” (Matt. 7:15). Regarding the scribes and Pharisees, the Lord Jesus said, “They tie up heavy burdens, hard to bear, and lay them on people’s shoulders, but they themselves are not willing to move them with their finger” (Matt. 23:4). He called them hypocrites, ones who love places of honor, blind fools, dead on the inside, serpents, a brood of vipers, and full of greed and self-indulgence.

These “teachers” were supposed to be shepherds, watching over the Lord’s people, who were sheep needing to be led. Instead, they used their office to further their own personal agendas and maximize their political power. In direct opposition, Jesus came “not to call the righteous, but sinners to repentance” (Luke 5:32).

The Levitical priesthood was based around sacrifice, often the sacrifice of lambs. There were sacrifices that were made to cover the sins of the priest making the sacrifice. The Lord Jesus was both the One making the offering and the Offering itself. He exemplified true service, and instead of placing burdens upon others, He took the burden of sin on Himself. The scribes and Pharisees were the shepherds who saw the wolf coming and fled; the Lord Jesus was and is the Shepherd who gives His life for the sheep.

As His purchased possession, we, as sheep, have the honor of serving the Good Shepherd. As we once were lost in our sins (Isa. 53:6), we have been bought by the precious blood of Christ. We may have authority figures, such as bosses, teachers, and, sadly, even church leaders, that cause us hardship and pain, but we can rest in faithful service to the One whose yoke is easy and whose burden is light (Matt. 11:30). It would be my prayer that those of you who are not saved would put your trust in the Good Shepherd, because He gave His life for you. For those who are saved, may we continually and faithfully serve Him, seeking opportunities to lead lost sheep to the Good Shepherd, and to ensure that we look after our own “flocks,” whether at school or work, in our own families or local church.