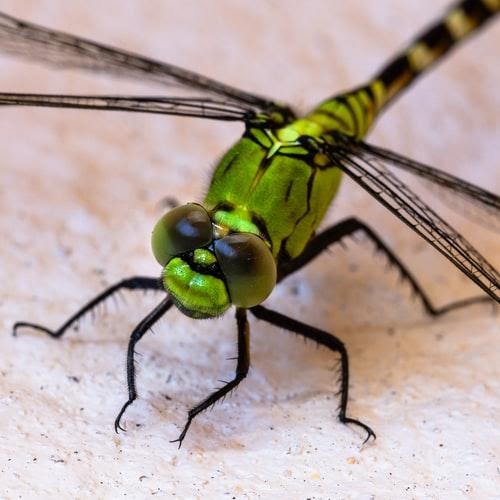 And do not fear those who kill the body but cannot kill the soul. Rather fear him who can destroy both soul and body in hell. (Matthew 10:28, ESV)

If you are a parent, you’ve surely had to deal with your children having encounters with insects. Most of them end poorly—maybe for both the child and the parent! The cries of horror associated with the tiniest of insects (a common housefly) can really make for an entertaining evening. It should come as no shock, then, that a nearly apocalyptic freak-out will ensue upon the first meeting with a dragonfly! I’ve been there—the shrieking cry, “IT’S A DRAGONFLY!” I’m laughing right now thinking about it! Meanwhile, if we could read the dragonfly’s mind, it would probably be saying, “What’s your deal?” But all the red flags are there to strike fear in the mind of a child (and maybe an adult). First, it’s an insect. Second, it’s a large insect. Third, it makes that bizarre sound like blinds being flapped up and down. Fourth, it has those crazy eyes—eyes that God created, by the way, to have the most lenses of any insect, up to 30,000.

Let’s face it, dragonflies look intimidating and scary. But they aren’t something we should be afraid of; they can’t do anything to us. They aren’t aggressive, so they aren’t going to hawk over you like a hornet might. They may look like they should have a stinger, but they don’t. If it feels threatened enough, it might try to bite you if you hold it in your hand, but it would be extremely rare for that bite to even break your skin—their teeth aren’t sharp enough. So rest easy, folks. If you see a dragonfly, it’ll probably check out the scene, see if there is any food or water around, and then fly off to greener pastures.

This brings us to the idea of misplaced fear, something that applies to believers and unbelievers alike. If you are not a Christian, what do you fear most in this world? Common answers would be things like accidents, heights, public speaking, disease, crime, and so on. Any of these can bring genuine terror, injury, or even death. But are these the things you should fear the most? Jesus tells an unbeliever what to fear the most. Even if something in this world has the power to put us in the grave, it is God that has the power and authority to “destroy both soul and body in hell.” The very worst anyone in this world can do is take our life, as bad as that is. But shouldn’t the fear of God cause unbelievers to quake in their shoes? He has the power of eternal death.

On the other side, if you are a Christian, what do you fear most in the world? Is it the same things the unbeliever fears? It shouldn’t be! We should be driven by a reverential fear of our God. He commands our devotion to Him; He requires our obedience to Him and the Holy Scriptures. Do we live our lives in such a way that demonstrates our fear and reverence of Him? When we callously disobey the Scriptures, we act as if we have no fear of God at all. When we worship half-heartedly (or no-heartedly), neglect sharing the gospel, or refuse to act and live differently than unbelievers, we are essentially saying that we have no fear of consequences. Sure, we won’t end up in hell to be judged for our sin, but don’t we fear living in a way that will displease God?  I wish that notion would take the driver’s seat of my life every single day. He is still a holy God. He is still a jealous God. He still demands our complete devotion to Him. Am I willing to live in light of this? Why am I afraid of the response of an unbeliever or a lukewarm believer if I obey the Lord? I need to heed the words of David: “The LORD is my light and my salvation; whom shall I fear? The LORD is the stronghold of my life; of whom shall I be afraid” (Psalm 27:1)?

Lessons from Nature 6: Our Value to God