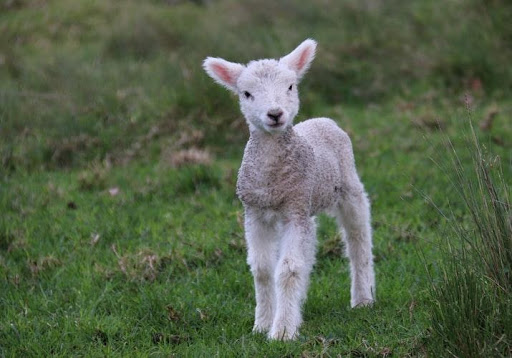 Lessons from Nature Day 7: The Lamb of God (Sunday Selah)

A lamb. Such an adorable, mild creature. When shorn, it doesn’t fight the shepherd. And even when led to be killed, it still doesn’t fight. They are non-confrontational animals, and are thus subject to easy pickings for wild predators. And did I mention how cute they are? I definitely think it would be fun to have a little lamb to spoil as a pet!
But these creatures are used in several places in the Bible to describe the Lord Jesus. When we consider the cross, these characteristics absolutely come to the forefront. Oppressed? Think about the mockery and verbal abuse He faced from the rulers and the soldiers. They were “in charge” (even though they weren’t), and abused Him relentlessly. Afflicted? Consider the pain associated with scourging, beatings, the crown of thorns, and crucifixion. Was any ever afflicted like He was? But then, measure His response. Did He lash out violently against those who afflicted Him? Did He utilize His position as Ruler of the Universe against those who oppressed Him? No. He was silent and submissive. Just like a lamb. Our Lamb. My Lamb. The Lamb that John the Baptist spoke of in this way: “The Lamb of God, who takes away the sin of the world” (John 1:29). I think of all He went through, silently, allowing the oppression and affliction. I’m so grateful that He loved and valued me so much! May all of our hearts bow in worship, reverence, and thanksgiving!

Thoughts on Psalm 23 6: Defined by Goodness and Mercy