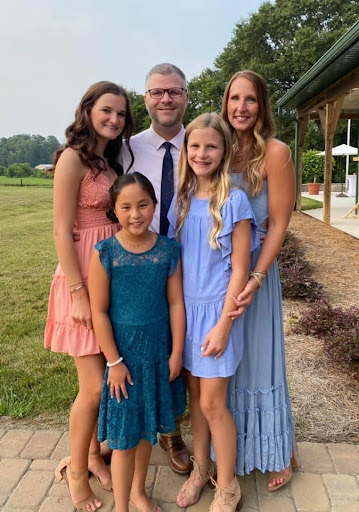 My name is Daniel Petterson, and I live in North Carolina. I’ve been married for 18 years to the love of my life, Cindy, and have three fantastic daughters. However, within 3 years, I’ll be the father of three teenage daughters—your prayers would be appreciated! We also have two cats to keep us further entertained.

I am a credit manager, doing a job that is very difficult to explain. My own family doesn’t really know what I do, but I guess that’s okay! I generally specialize in high-risk credit analysis.

Having been raised in a home where the gospel was a priority, understanding I was a sinner needing salvation was never an issue for me; it was a matter of putting salvation ahead of everything else. I remember being afraid that Jesus would return and I would be left alone, since my entire family were Christians. As a young kid, I had told everyone I was a believer, but I really wasn’t. The thought of being left without my family became an obsession, and I finally figured I should deal with it instead of being afraid. I came to realize, as an 11-year-old boy in May 1987, that salvation wasn’t a matter to put off and so I finally gave it attention. But as hard as I “tried,” I couldn’t get it. And that was the problem, I suppose—I was trying! I remember being horrified, and said to God, “I don’t want to be in Hell!” And right then, I remembered the words Jesus said on the cross: “It is finished.” I could never “try hard enough,” because the work was already finished. Jesus died for my sins, and that’s all I will ever need to be forever forgiven and saved.

John 19:30 will always be my favorite verse (see above). Jesus’ words, “It is finished,” had—and still has—so many implications. A Man who otherwise should have been weary and nearly unable to speak said those words with a loud voice. The priests who were about to offer the Passover sacrifices? That work was finished. The suffering and anguish of Jesus? Finished. The work of salvation? Finished! My forgiveness—also finished. What a great verse!

My favorite hobby is anything related to music (but only the music I like, of course). I love to listen to music, sing, discover new talent, and collect vinyl records. I used to be a little more obsessive about it, but I’ve relaxed a little over the years. But sitting on the couch listening to a record while drinking a cup of coffee is one of life’s distinct pleasures. I enjoy a wide spectrum of music—almost all of it faith-based or from Christian artists. Outside the realm of Christian music, I also enjoy old jazz music (Coltrane, Davis, Ellington, Fitzgerald, etc.), the big band era vocalists (Sinatra, Bennett, Martin, Buble, Connick), and all things Christmas music. But I really don’t like country music—at all.

My dream travel destination will almost certainly never happen—the Maldives. I’m far too cheap to spend the money to get there!

I write for Vine to Branches because it’s a good creative outlet, and I have the opportunity to potentially reach people who would otherwise not give faith-based writing a chance. This site offers the flexibility to be myself in my writings, too, which I feel is absolutely vital.