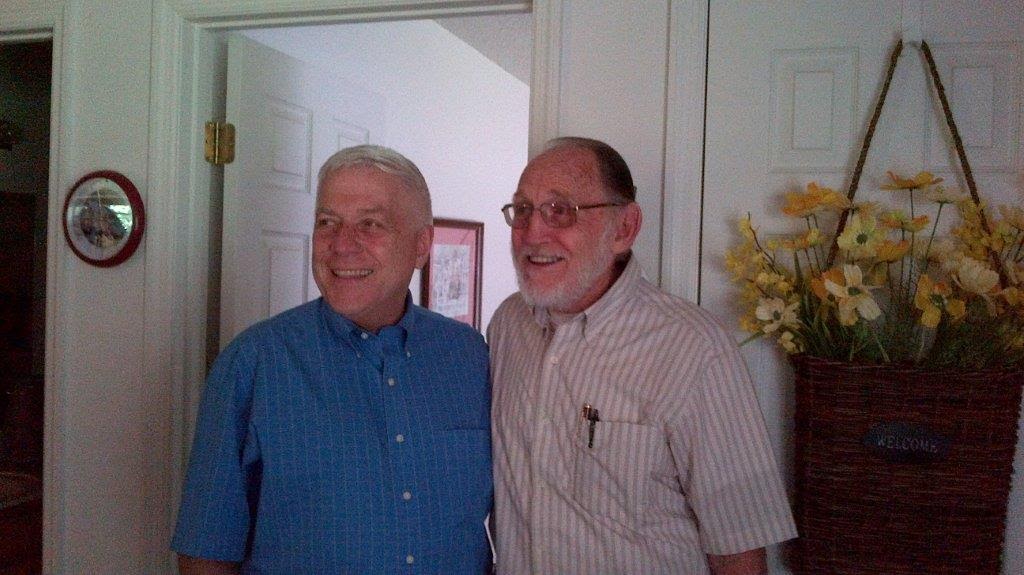 Sometimes, you meet someone in life that completely turns your life upside down. It was like my life had two separate parts of its journey: one before Louie Dodd, and one after. From the very day I met him, my life was on course for a miraculous transformation, little did I know it at the time. It all began back in the 60’s, when my cousin, Bobby, and I made our way to the recruiting office on the second floor of the McKeesport, PA post office. Unbeknownst to my parents, my cousin and I had decided to join the U.S. Air Force, and excitedly made our way to sign up. I had graduated from high school and had worked for a while, but I simply did not have the finances to go to college at the time.

The recruitment office gave us a battery of tests to determine which type of military training we were best suited for, and gave us several options for various training schools. I especially wanted a technical position and was disappointed that there was not an immediate opening in the area I was most interested in. Bobby took a position with an immediate opening, and found out he would ship out in a very short period of time. I wandered next door to the Navy recruiting office, and found open availability for the training I most desired. Within two short weeks, I would be an active member of the United States Navy. This is exactly where God wanted me, with a clear purpose for my spiritual rescue.

After about one year of school, I was sent to my first duty station in Little Creek, Virginia. I was stationed onboard a Navy ship called USS Talbot County, LST 1153. Going onboard with my orders and seabag, I was assigned to a berth and made my way to the bunk area to unpack. Just about everyone was off the ship at that time, so I decided to do a walk around, and familiarize myself with my new home. The opposite side of the ship was where the Marines berthed when they were with us, but it was empty at the time, so I wandered over there where I met up with one of the soldiers on duty that night. He said, “Welcome aboard, my name is Louie Dodd.” We spoke for a few minutes and I learned he was from Greenville, SC. He told me they called him “deacon” or “preacher” on the ship, and then followed up with the big question: “are you a Christian?” I told him I thought I was—at least as much as anyone else was. But he went even deeper when he asked me the next question: “If you died tonight, where would your soul be?” I told him I would probably be in hell. I found this conversation to be very strange and soon forgot about it.

A few days later, I was standing in my bunk area with several other sailors when along came Louie. We made some small talk, and then he pulled out a Gideon’s New Testament and asked if he could read a few verses with me. All of the other sailors quickly scurried away, leaving me as an audience of one. He read Romans 3, verses 10 and 23, and told me about sin. I knew I was a sinner, and didn’t need to be told that I was. He also read from Romans 6:23, speaking to me about the wages, or penalty, of my sin. He then read from the book of Revelation—mentioning the Lake of Fire. He then left, and I was left feeling uncomfortable. The guys that had scurried off began to reappear, with snide comments about Louie and his discussion of faith. I made it a point to try my best to avoid him from then on, ducking out of the way when I saw him around the ship.

One day, I was working out on the deck when along came Louie, asking permission to work out with me. As we lifted weights, Louie began quoting scripture to me. I didn’t think too much of it and we headed out to the Mediterranean where I ran into him again onboard. He said, “Kurt, I am praying for you. Maybe God will have to bring a crisis into your life to awaken you concerning your need of God’s salvation.” Louie’s words were getting to me, and I did begin feeling concerned and convicted of my sin, and the scriptures I had heard from him. I began thinking of eternity for the first time, and where I would be if I died in my sins. I was restless, just like the waves that tossed our ship around as I lay in my bunk at night.

We had been at sea for several weeks, heading into the port of Genoa, Italy. We had no cell phones or internet—any news from home came in the form of mail. Mail call was an exciting time on the ship as we longed to hear from our loved ones at home. This particular day, there was mail for me. A letter was tossed my way from my twin sister, Linda. It did not start out the way I would have liked, as she told me of sad news—the passing of my dear Uncle Jim. He was sitting at the dinner table, and just slumped over in his chair and passed into eternity. Uncle Jim was like a father to me, taking me to football games and often bringing me little gifts. I not only felt sad, but immediately thought this: if I had died, I would be in hell, facing eternal punishment.

I grabbed the letter, and went in search of Louie, finding him pretty quickly. He reminded me of how he had been praying, and how this situation likely was being used by God to speak to me about my spiritual need. My heart was stricken and deeply troubled, and I had an immediate desire to make things right with God. I went to my little radar room and bolted the door and got down on my knees, crying out to God for His mercy and salvation. As I cried out to Him, there was a peace that flooded my soul. I felt a burden lifted as I realized that Jesus died for me. That day in January of 1961 forever changed the course of my life, and I will remember and cherish it forever.

I thank God often for bringing Louie into my life. God used him to bring His gospel to my lost soul, and I am forever grateful. I had the privilege of attending his funeral, and having my salvation story read there. As I sat listening at the service, I was deeply touched at how many people heard the gospel through this faithful servant—my brother, Louie Dodd. May each of us realize the awesome privilege we have in knowing Christ, and be willing to share His gospel to those around us who are lost and in need of His salvation. Even when they don’t seem like possibilities for rescue, God can always do the impossible—just like He did with me. As I am well into my 81st year, I am getting closer and closer to seeing His face one day, a day I look forward to and a day I will finally be able to thank Him face to face for His marvelous grace.

For all have sinned and fall short of the glory of God (Romans 3:23, ESV),

For the wages of sin is death, but the free gift of God is eternal life in Christ Jesus our Lord (Romans 6:23, ESV).