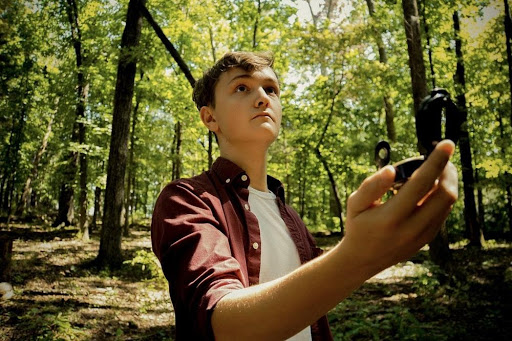 The Impact of Jesus on Seven Men Day 5: Zacchaeus

There are a few occasions in life when you are at the right place at the right time. I remember a coworker of mine really wanted to meet Carolina Panthers’ star linebacker, Luke Kuechly. I had gone to their practice sessions a few times during my year of graduate school in downtown Charlotte, so I mentioned that we might be able to meet him if we showed up to practice right after it concluded for the day. The only trouble was that the Panthers don’t advertise what time practice begins and ends in order to keep hundreds of people from showing up. We decided to head over to the practice field during lunch and try our luck.

We worked a couple of blocks away from the Panthers’ stadium and practice field, so we could quickly make our way there and back and not be away from our desks for too long. As we approached the stadium, a sea of professional football players in blue practice jerseys passed in front of us, heading back toward the stadium. We were afraid it was too late to see Luke. After forty or so players walked past us, we made our way under the bridge and over to the practice field to see if there was anyone left. Lo and behold, the man, the myth, the legend was standing right there, signing his last autograph of the day. We were able to meet Luke Kuechly and get a picture with him. We barely made it to the right place at just the right time.

Luke chapter 19 begins with the story of a man named Zacchaeus. We read in verse 2 that “he was a chief tax collector and was rich.” In that day, tax collectors were not very popular (full disclosure—I do not collect taxes; I just calculate them!). They were known for being thieves. You may feel that the IRS is a band of thieves, but tax collectors in that day were on another level. They were able to become wealthy by demanding that people pay more taxes than what the Roman government levied and keeping the difference for themselves. If you refused to pay, you could be severely punished.

Zacchaeus wanted to see the Lord Jesus as He passed through Jericho, but because he was too short to see over the crowd, he had to climb into a sycamore tree to catch a glimpse. As the Lord passed by, He looked up and saw Zacchaeus in the tree. Calling him by name, the Lord Jesus told him, “Come down, for I must stay at your house today” (v.5). Why would the Son of God want anything to do with this wicked man? Even the people in the town were confused as to why the Lord Jesus had “gone in to be the guest of a man who is a sinner” (v.7). It wasn’t a coincidence that Jesus was passing through Jericho that very day. It wasn’t happenstance that He saw Zacchaeus up in the sycamore tree. Yes, Zacchaeus sought an opportunity to see Jesus, but he did not know that Jesus was also seeking after him.

In the presence of the Lord, Zacchaeus trusted in Him and was saved. No longer did he desire to abuse his occupation using thievery. Instead, his heart was changed, and he sought to give away half of his riches and restore fourfold anything he stole. Even though following the Lord meant giving up his “hard-earned” fortune, Zacchaeus counted salvation as greater than the riches this world has to offer. The impact that the Lord Jesus had on Zacchaeus is still felt today. If you are a Christian, you have no doubt been sought after by the Lord. I am thankful that He ever sought after a sinner like me. Even when I was not seeking after Him, He sought after me. I am eternally indebted to the One who “came to seek and to save the lost” (v.10). May we also be willing to put aside our own selfish ambitions and seek to live for the One who laid down His own life so that we might have life everlasting.

“Amazing grace, how sweet the sound
That saved a wretch like me.
I once was lost, but now I’m found,
Was blind, but now I see”

Tools to Thrive as a Man of God 3: Deep Friendships

The Impact of Jesus on Seven Men 4: James